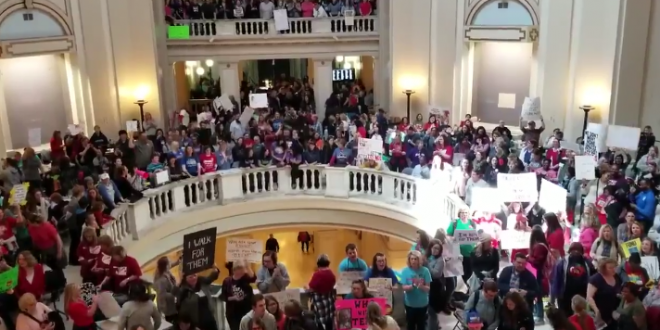 Striking Oklahoma teachers jangled their keys and chanted “Where’s my car?” at their governor after she compared their demands to a “teenager wanting a better car.”

Public schools in Oklahoma are closed this week as teachers strike for better pay and resources. On Tuesday, Gov. Mary Fallin (R) said the teachers striking for improved pay and benefits are asking for too much, like “a teenager wanting a better car.”

Protesters followed Fallin up the stairs, chanting “Where’s my car?” More than 36,000 teachers and supporters seized every floor of the Capitol this week as the strike moved into it’s fourth consecutive day on Thursday.

Chanting “where’s my car?” Waving their car keys in the air! #OklahomaTeachersWalkout pic.twitter.com/Zw7bOCKFNg

Chants of “Where is Mary,” a day after Gov. Mary Fallin said teachers want more money “like a teenager wanting a better car.” #oklaed #oklaedwalkout pic.twitter.com/rtdU9ivc5A