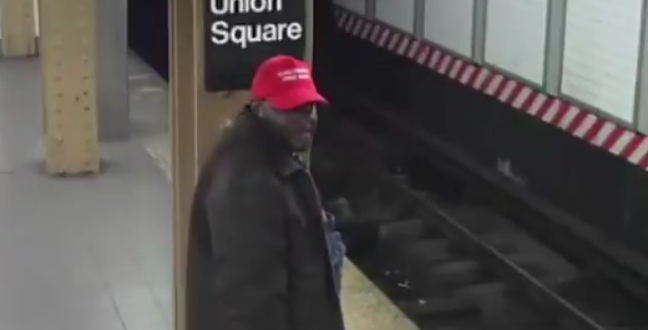 According to police, the Trump supporter got into a verbal argument with the fellow rider before punching him in the head on a 4 train as it approached the Union Square station in Manhattan.

He then followed the victim, described by police as a 24-year-old Hispanic man, off the train and shoved him onto the tracks. The attacker allegedly made a number of racially derogatory statements during the assault. The victim suffered cuts on his head, and was treated at an area hospital, police said.

WANTED: Black male wearing a red hat and red shirt both with the words “Make America Great Again” , blue overalls, a black ¾ jacket, and jewelry around his neck. Wanted for assaulting a male on the 4 train platform in Union Square. Call #800577TIPS pic.twitter.com/FliEXrrxNZ