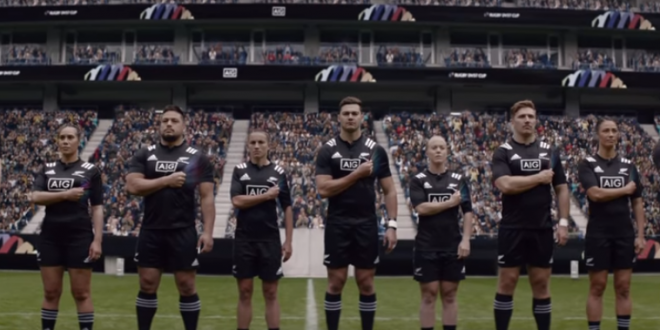 The All Blacks and the Black Ferns have made a very public statement on where they stand on diversity and inclusiveness as they launched their “diversity is strength” campaign. Pairing up with AIG, the two teams released a two-minute video outlining their values. The next “battle” and “enemy” was devious and truly formidable, the video said. “It is discrimination – an enemy that cannot be fought alone and must be defeated together.

It came in the wake of a controversial homophobic comment made by Wallabies player Israel Folau three weeks ago. Folau, who is married to Silver Ferns shooter Maria Folau (nee Tutaia), came under scrutiny after replying to a question on an image posted on Instagram which showed “God’s plan.” “@izzyfolau what was gods plan for gay people??” user Mike Sephton-Poultney asked. “HELL”, Folau responded. “Unless they repent of their sins and turn to God.”

As you’ll see in the clip, the team’s jersey reveals a rainbow stripe when the players stretch it from the side.