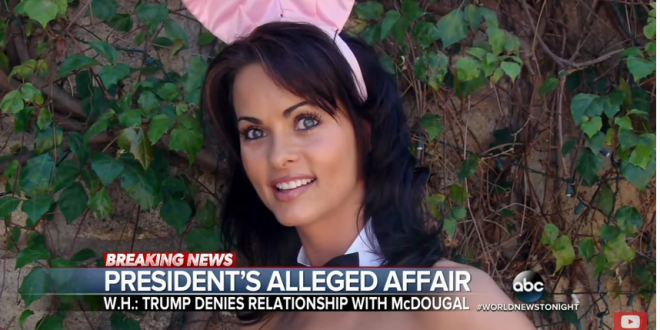 The tabloid news company American Media Inc. agreed to let a former Playboy model out of a contract that had kept her from talking freely about an alleged affair with Donald J. Trump, her lawyer said. The settlement agreement, reached Wednesday, ends a lawsuit brought by the model, Karen McDougal, and protects the president from being drawn into a legal case involving efforts to buy the silence of women who had stories to tell about him during the 2016 campaign.

He still faces another lawsuit, from the pornographic film star Stephanie Clifford, who is suing to get out of a deal that Mr. Trump’s personal lawyer, Michael D. Cohen, arranged in 2016 for her silence about an alleged affair. In August 2016 American Media, which owns The National Enquirer, acquired the rights to Ms. McDougal’s story about Mr. Trump — which it never ran — in return for $150,000 and commitments to use its magazines to promote her current career as a fitness specialist.

The change comes after the FBI raided Cohen’s office and there’s much more about that at the link. American Media had earlier amended the contract, allowing McDougal to respond to “legitimate press inquiries,” hence her recent interview with CNN.