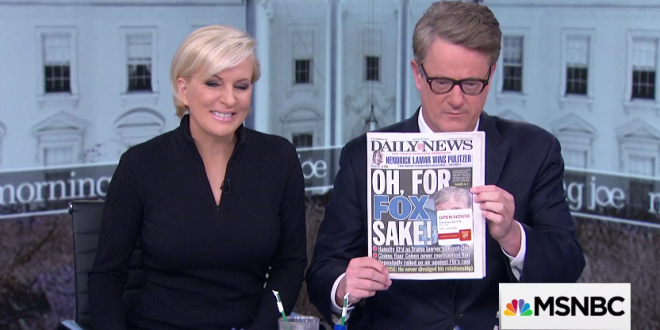 Morning Joe On Hannity: My God, How Awkward

“Did Sean Hannity tell his bosses that, ‘I’m a third client of Michael Cohen and I’m going on the air tonight?’ Because, I will tell you, if he did not and then he proceeded to do the coverage that he’s been doing for months, honestly, and it appears he intends to continue doing, he’s lying to his viewers – bald-faced lying to his viewers – to not disclose that he’s a third client of Michael Cohen and yet to do these incredible hit jobs on the raid on Michael Cohen’s office. My god, how awkward.” – MSNBC host Mika Brzezinski, during a Morning Joe panel that brandished today’s mocking tabloid headlines.

Previous Colbert Gets Orgasmic Over Hannity News [VIDEO]
Next Theresa May Calls On Commonwealth To Reform Anti-Gay Laws: “I Regret Our Legacy Of Discrimination”