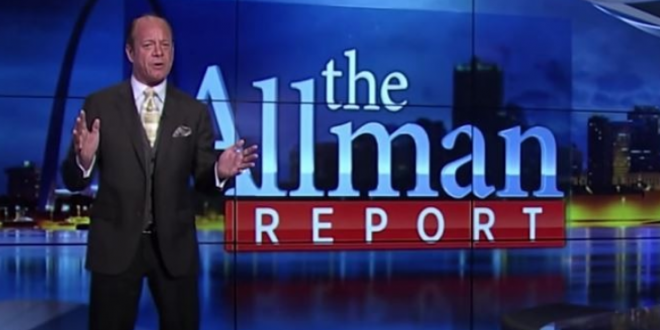 A Sinclair Broadcast talk show was canceled Monday after its host, Jamie Allman, wrote an explicit tweet about assaulting a survivor of the deadly school shooting in Parkland, Florida. A spokesman for Sinclair said in a statement that Allman’s show on the St. Louis ABC affiliate KNDL was “cancelled and he is off the air immediately.”

Entercom, the parent company of the radio station that hosts Allman’s morning show, declined to comment to NBC News and said Allman was not discussing the matter. Allman posted the apparent threat on Twitter on March 26, saying he was “hanging out getting ready to ram a hot poker up David Hogg’s ass tomorrow.”

On The Allman Report, which airs on Channel 30, a segment last week touched on the boycott of Ingraham and whether Hogg was a reasonable target for critique. “You can’t say ‘Hey I’m just a kid,” Allman said of Hogg. “We have to be allowed to refute what you’re saying… or to respond to it, you can’t be all the time grabbing your blanket when the going gets tough.”

During the segment, Allman repeatedly noted that Hogg liked dropping “f-bombs” and that he should expect to receive push-back if he’s going to “get his hands dirty” in political issues. Allman added, “Just be a grownup about it.” Which, in Allman’s world, apparently means being threatened publicly with sodomy before you’re even old enough to vote. How very grown up of him.