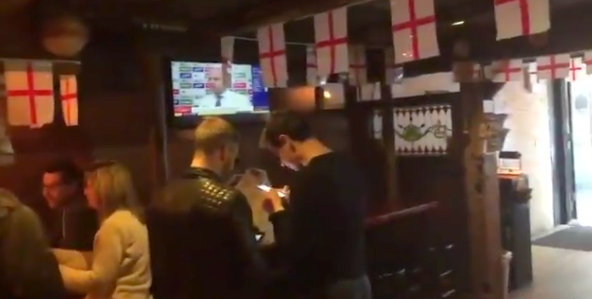 Milo Yiannopoulos walked into the wrong bar on Sunday in New York, and ended up crashing a gathering of the Democratic Socialists of America. As seen in videos posted on Twitter (where Milo is banned) The controversial conservative personality can be seen inside the bar with an acquaintance as a large group chants “Nazi scum get out!”

Milo has retreated from the spotlight since his comments about pedophilia lost him a job at Breitbart, a six-figure book deal with Simon & Schuster, and a ban from his social media platform of choice, Twitter. He recently embarked on a speaking tour of Australia, and is now apparently back in the U.S.

In a whining Facebook post about the incident, Milo claims he was “shoved” by the bar’s patrons. No shoving is seen in the videos posted to social media.

There are literally thousands of bars in New York City and we’re supposed to believe he just happened to drop in on the one bar where that group was meeting? Yeeeeah.

When Milo shows up to the bar after the @nycDSA CLC meeting pic.twitter.com/37VpC1sPlj

I was with MILO. Citywide leadership committee? It was 20 lesbians and a Gizmodo reporter in a bar. https://t.co/B9xgxjQPef

Here’s me and Milo politely getting our bags from the wait staff after a mob of Leftists from the @nycDSA physically assaulted us as we tried to go back to our table for lunch. I guess this is what Nazis look like now, 2 homos who like small government out for lunch on a Sunday https://t.co/bfbLki9SCd

Dude, why didn’t you tell the ARMY who flew him up here? They would have loved to clean up that mess. @ProudBoysUSA https://t.co/fDW2HOYLja

Milo Yiannopoulos just walked into a Manhattan bar full of @nycDSA members, got heckled for five minutes, and left

When I asked whether he felt shilling supplements on Infowars felt like a good career move, he got very agitated and explained how guest hosting a radio show works

Previous Police: No Credible Sightings Of Waffle House Shooter
Next Sanders On Pompeo: Democrats Have To Decide If They Love America More Than They Hate Trump [VIDEO]