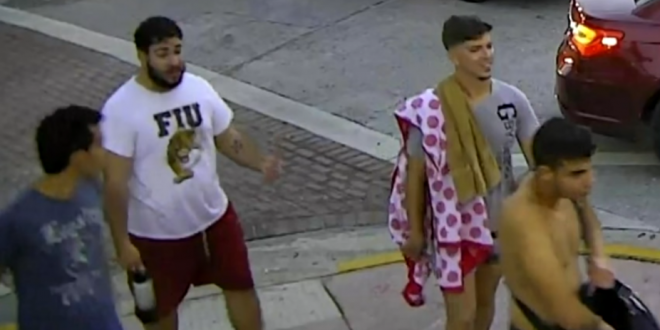 Two victims were attacked by four young men in Miami Beach after the city’s Gay Pride Parade Sunday in what police think may have been a hate crime. In video footage of the incident, four young men — one wearing a Florida International University T-shirt — are seen walking up to a bathroom area on Ocean Drive and Sixth Street at about 7:40 p.m. Sunday.

Two other men walk out, and are immediately attacked by the four. One of the attackers shouts a Spanish slur used to refer to LGBT men before he and the other attackers begin repeatedly punching the two men. When the two victims, who sustained multiple injuries to their faces, began to run away, the attackers chased them, Miami Beach police said.

That’s when Helmut Muller, who was standing near the bathrooms at the time of the fight, went after the attackers to break up the fight. Muller said he saw when the men walked up and said the fight was completely unprovoked. “It happened so quick,” said Muller, 29. “They almost killed this guy, literally.” Muller said the two victims were injured badly, with multiple bruises and cuts.

Rene Chalarca and Dimitri Lugonov told police they were were attacked by three men after they shared a hug while waiting to use a restroom at Lumus Park in the 500 block of Ocean Drive. Police said Chalarca and Lugonov had cuts and bruises on their faces and were treated by paramedics at the scene. The bystander was taken to Mount Sinai Medical Center for treatment.

Chalarca and Lugonov believe they were targeted because they are gay. “We were together. So for me, it’s like, yes, it was a hate crime,” Chalarca said. Police said surveillance cameras recorded the three men and another man as they left the scene of the attack. Police released the video and images of the men Monday in hopes of finding them. Three are described as Hispanic white males, each about 5 foot 8, and between the ages of 19 and 24. Anyone with information should call Miami-Dade Crime Stoppers at 305-471-TIPS.