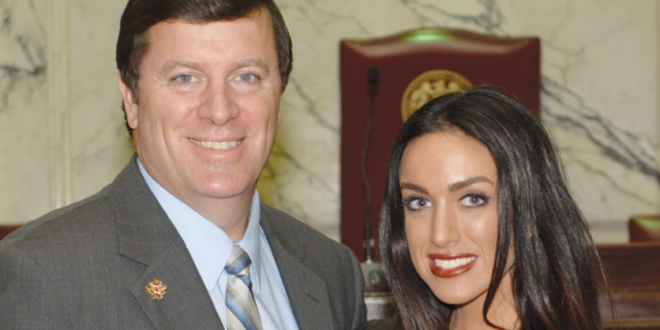 Del. Meagan Simonaire said in a dramatic speech Wednesday she would vote for a ban on conversion therapy for homosexuality and revealed that her father — state Sen. Bryan Simonaire — asked her to try the discredited treatment after she revealed she was bisexual.

The Republican from Pasadena, who is not seeking re-election after one term, split with her father’s opposition on the measure. The senator tried to block the ban on the Senate floor last week, saying families should have the right to use “loving” conversion therapy.

The House of Delegates voted 95-27 in favor of Senate Bill 1028. The Senate passed the bill last week and it now goes before Gov. Larry Hogan. It bans conversion therapy by licensed medical professionals. It also prohibits the use of state funds for support or referral of the practice.

Hit the link for Meagan’s story, which she told in the third person before confirming that the girl in the story was indeed her. (Tipped by JMG reader Joel)

A profound statement by Del. Meagan Simonaire to ban conversion therapy — “you cannot fix what is not broken.” Thank you @Del_Cullison for this bill and reminding us that we are all beautiful imperfect beings. #NotBroken pic.twitter.com/Q9of7UqqP7

Sen. Bryan Simonaire voted against a bill banning conversion therapy for children. Today his daughter, Del. Meagan Simonaire, revealed her parents sought the therapy for her when she told them she was bisexual. (by @HutzellRick)https://t.co/VvnGC7vvZc

As Del. Meagan Simonaire said on the House floor re bill to ban conversion therapy — “you cannot fix what is not broken.”

Her father, Sen. Bryan Simonaire, opposed the Senate Bill. At the end of the delegate’s comments, she said thanks for allowing me to share “my story.” After the bill passed, delegates rose, faced Simonaire and applauded.