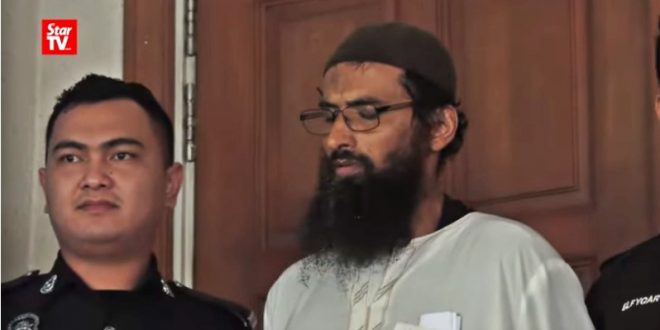 A Danish citizen in Malaysia has pleaded guilty to maliciously publishing fake news by posting a YouTube video critical of police, making him the first person punished under the country’s new, controversial Anti-Fake News Act.

Salah Salem Saleh Sulaiman, 46, is a citizen of Denmark. He posted on YouTube on April 21, after a Palestinian lecturer was shot and killed in Kuala Lumpur. In the video, Sulaiman “claimed he was with the Palestinian victim during the shooting and made countless calls to the police who arrived the scene 50 minutes later,” Malaysia’s The Star reports.

But police say their records show that a patrol car was on the scene eight minutes after the shooting, according to Reuters. Sulaiman was charged with maliciously publishing fake news. Sulaiman, who did not have a lawyer, pleaded guilty. He was fined just over $2,500, but because he could not pay the fine, he will serve a month in jail, Reuters says.

Sulaiman, who was not represented at the court hearing, pleaded guilty, but said the video was posted in a “moment of anger” and he did not mean any harm. “I agreed I made a mistake … I seriously apologise to everybody in Malaysia, not just in the Malaysian police,” said Sulaiman, a Danish citizen of Yemeni descent.

Malaysia is among the first few countries to bring in laws against fake news. The prime minister, Najib Razak, has been dogged by a multibillion-dollar corruption scandal involving an indebted state fund, and activists fear the new law could be used to criminalise opinions critical of the government. The country is holding a general election on 9 May.