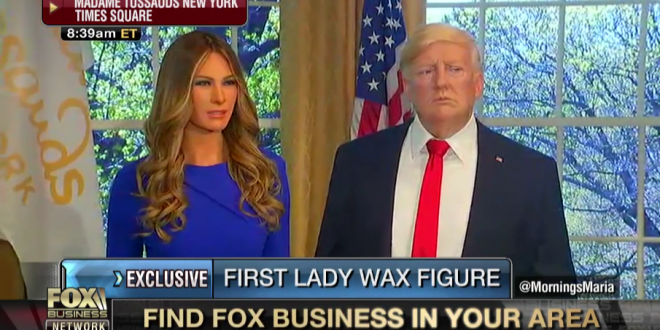 To the side, a screen displayed the cover of Spicer’s soon-to-be-released book, The Briefing. Behind him was an interactive station called “Give Melania a voice,” a title a bit too on the nose for some. The station allows visitors to pretend they’re tweeting as the First Lady, a feature that will surely be abused by the public in the coming months.

Madame Tussauds representatives repeatedly referred to Melania as a celebrity and fashion icon instead of First Lady.

.@seanspicer will be at the unveiling of a Melania wax statue at Madame Tussauds, and there’s a pile of these pic.twitter.com/hjy0N8o9co

There’s a big sign inviting visitors to “Give Melania A Voice” – what could go wrong here? pic.twitter.com/lF0J2t5czG

A new Melania Trump exhibit at @MadameTussauds in New York opens today, and Fox Business got an exclusive preview. pic.twitter.com/QsgklLxNyj