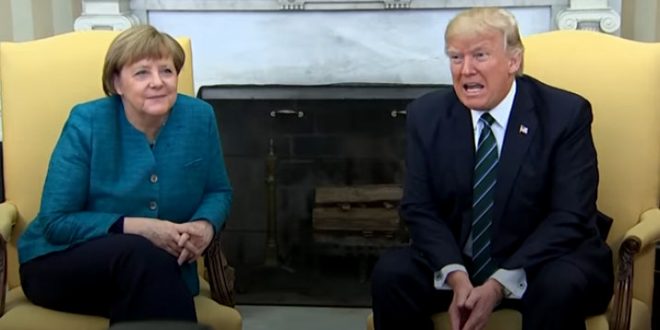 President Trump welcomed German Chancellor Angela Merkel to the White House Friday, calling her “a very extraordinary woman.” At a photo op before a working lunch, Trump said the two leaders “will be working on a lot of different subjects,” including trade and NATO.

Trump and Merkel will take questions from reporters after their discussions. Merkel’s visit does not include much of the fanfare that accompanied French President Emmanuel Macron’s trip to Washington, D.C., earlier this week.

While there will be no fancy state dinner, Merkel is expected to echo many of the concerns that were raised by Macron about U.S. positions on trade and foreign policy during her Oval Office meeting and working lunch with Trump.

Previous Paul Ryan Forces Out House Chaplain After Prayer That “There Are No Winners And Losers In New Tax Laws”
Next Adam Rippon Skips Trump Meeting With US Olympians, Urges Twitter Followers To Make Donations To GLAAD