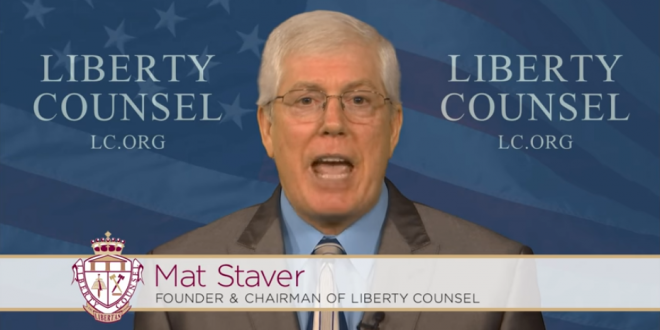 The Liberty Counsel is doubling-down on last week’s ridiculous claim that California’s pending ban on ex-gay torture for adults would outlaw the bible. This time, there’s also a lying video. Via press release:

A California bill is so broad that it bans books, printed materials and advertisements that provide information that a person facing unwanted same-sex attractions or gender confusion can change. AB 2943 declares “advertising, offering to engage in, or engaging in sexual orientation change efforts with an individual” is fraudulent business practice.

The Bible specifically refers to homosexuality 1 Corinthians 6:9. Then verse 11 states, “And such were some of you,” thus clearly stating that through a personal relationship with Jesus Christ, people with same-sex attractions or who engaged in same-sex behavior can change. Advertising this passage or quoting it in a brochure would be considered fraudulent business practices under this bill.

“California AB 2943 is a dangerous bill that would punish people for their biblical beliefs about marriage, gender and human sexuality” said Mat Staver, Founder and Chairman of Liberty Counsel. “This law is stunning in its breadth. The mask of those supporting this oppressive bill has been removed. Their goal is to crush Christianity and any viewpoint that does not align with the state. We stand ready to file suit to stop this assault on freedom if this bill is signed into law,” said Staver.

From the Snopes debunking:

Anthony Samson, a Sacramento attorney and policy advisor told us by email that the bill would prohibit conversion therapy “as a commercial service in exchange for monetary compensation,” adding: that “It does not apply to the sale of books or any other kind of goods, and it does not prevent anyone from speaking or writing on the subject of conversion therapy in any forum.”

Assemblyman Evan Low’s bill does not seek to outlaw all religious or moral instruction regarding sexuality and sexual orientation, nor would it ban the sale or possession of generic religious texts such as the Bible. Christian dogma might form the basis of efforts change a person’s sexual orientation, but the Bible itself is not a “gay conversion therapy” manual.

A bill in California could ban Christian books… even potentially the Bible! pic.twitter.com/QOpAxgzVfL

Fact Check: Would a proposed law ‘ban the Bible’ in California?