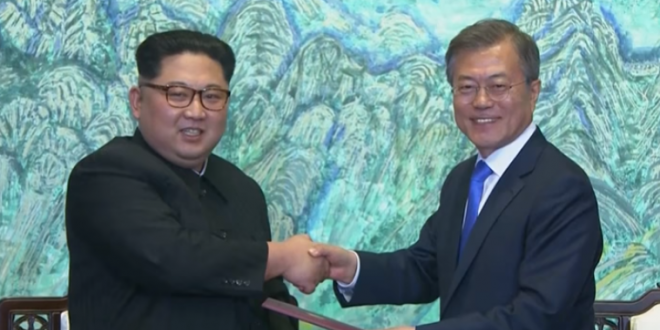 With a single step over a weathered, cracked slab of concrete, North Korean leader Kim Jong Un made history Friday by crossing over the world’s most heavily armed border to greet South Korean President Moon Jae-in for talks on North Korea’s nuclear weapons.

Kim then invited Moon to cross briefly back into the north with him before they returned to the southern side. It was the first time a North Korean leader has crossed over to the southern side of the Demilitarized Zone since the Korean War armistice in 1953.

In what both sides referred to as the “Panmunjon Declaration,” the Koreas agreed to an end goal of formally ending the Korean War with a peace treaty by the end of this year, and to immediately end all hostilities on the Korean Peninsula, involving trilateral or 4-way talks with the U.S. and China.

After a furious year of missile launches and Nuclear testing, a historic meeting between North and South Korea is now taking place. Good things are happening, but only time will tell!

KOREAN WAR TO END! The United States, and all of its GREAT people, should be very proud of what is now taking place in Korea!