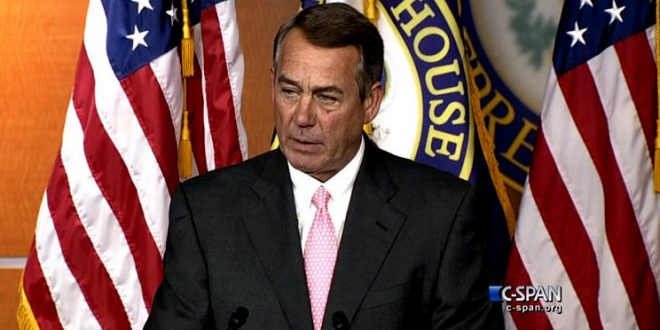 The U.S. marijuana industry has a new spokesman: John Boehner. The Republican former Speaker of the House has joined the advisory board of Acreage Holdings, a company that cultivates, processes and dispenses cannabis in 11 U.S. states. Boehner’s endorsement, after saying nine years ago he was “unalterably opposed” to legalization, could be considered a watershed event: Marijuana has gone mainstream.

“Over the last 10 or 15 years, the American people’s attitudes have changed dramatically,” he said in an interview. “I find myself in that same position.” Sixty-four percent of Americans, including a majority of both Republicans and Democrats, want to legalize it, according to an October Gallup survey. Former Massachusetts Governor William Weld will join Boehner on the advisory board of Acreage, which holds 35 licenses for cannabis businesses in the U.S.

The two said in a joint statement that they believe “the time has come for serious consideration of a shift in federal marijuana policy,” specifically citing the drug’s use by veterans “to self-treat PTSD, chronic pain and other ailments.”

“While the Tenth Amendment has allowed much to occur at the state level, there are still many negative implications of the Federal policy to schedule cannabis as a Class 1 drug: most notably the lack of research, the ambiguity around financial services and the refusal of the VA to offer it as an alternative to the harmful opioids that are ravishing our communities,” they wrote.