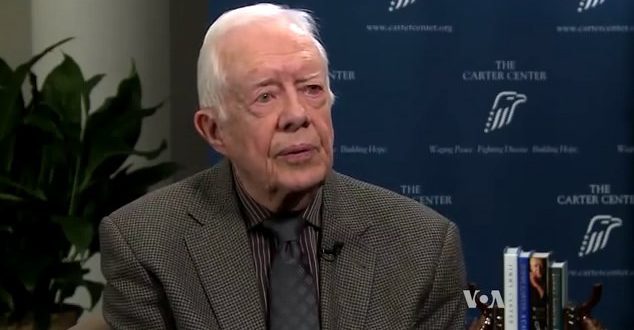 Jimmy Carter Warns Trump On Syria: Any Nuclear Exchange Would Be Catastrophic For All Human Beings

Expressing pride in his own record of peace, former President Jimmy Carter warned that President Donald Trump should steer clear of any military action involving Syria or other world hot spots and avoid a nuclear attack at all costs.

“I pray that he would keep our country at peace and not exaggerate or exacerbate the challenges that come up with North Korea, in Russia or in Syria,” Carter said in an interview Wednesday. “I hope he realizes very profoundly as I did, and as other presidents have done, that any nuclear exchange could involve catastrophe for all human beings.”

The 93-year-old former president added that even a lesser military attack “is a dangerous thing” than can spiral out of control. His remarks come as Trump continues to threaten attacks on Syria in response to a suspected chemical attack on civilians. As recently as Thursday morning, Trump said on social media that an attack would come “very soon or not so soon at all.” Russia has countered that such a move would have “grave repercussions.”