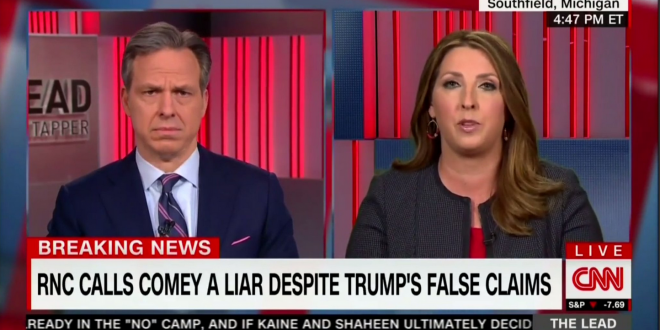 Jake Tapper Blasts RNC Chair: Why Do You Call Comey A Liar But Ignore Trump’s Thousands Of Lies? [VIDEO]

Tapper talked about the new RNC site and began listing a “sample” of President Donald Trump‘s lies, including that vaccines cause autism and that Barack Obama was not born in this country.

“The Washington Post reported that President Trump has made more than 2400 false or misleading claims since inauguration,” Tapper said. “Why do you care about James Comey telling the truth but not President Trump?”

“The media has an obsession with covering President Trump,” McDaniel responded, to which Tapper replied dryly: “We cover the president, yes.”

“But they have covered him nonstop in probably the most negative way that we’ve seen for any president,” McDaniel clarified. “But [we] know that they’re going to bring James Comey on and we don’t think he’s gonna get the proper vetting. That is something we want to make sure that the facts get out.”

After Broidy-Cohen scandal, Jake Tapper asks the question on everyone’s mind: “What the heck is going on at the RNC?” pic.twitter.com/muhHkvCrf7

Previous Trump Called Cohen Before Hearing, Prosecutors Say Cohen Has Long Been Target Of Criminal Investigation
Next Tony Perkins: Mike Pompeo Is A Ray Of Anti-Gay Hope After Years Of Obama’s Harassment Of Christians