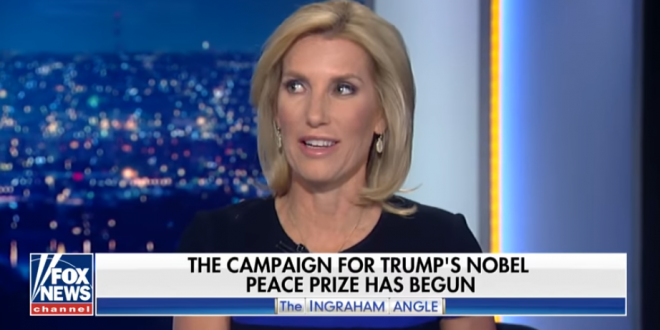 Ingraham: Trump Is A Shoo-In For The Nobel [VIDEO]

“I have to say, I think the only person who could have gotten us to this place – again, we’ll see where it goes – but it’s Donald Trump because of his unconventional approach to negotiations and frankly his tough talk.  ‘You gonna launch a nuclear war? Unilateral first strike, Mr. President?’ And he was like, ‘No, we’re gonna solve this.’

“Obama got it [the Nobel Peace Prize] in ten and a half months. He got it for ‘getting people to accept responsibility for facing global challenges.’ Now if that’s the benchmark, then Donald Trump, regardless of what happens, has to be a shoo-in for the Nobel.” – Laura Ingraham, speaking on last night’s show.