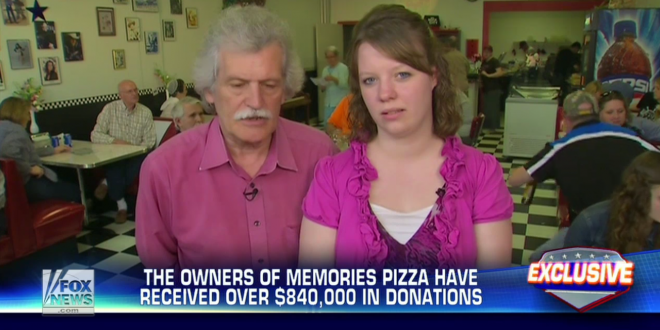 Memories Pizza, the shop that became embroiled in the national debate over religious and civil rights and touched off a national media firestorm in 2015, has closed. A sign in the front window of the pizza shop says it was shuttered last month.

Owners Kevin and Crystal O’Connor were the focus of intense criticism and media attention in April 2015 after they told an ABC 57 reporter that they wouldn’t cater a gay wedding because of their religious beliefs, although they added that they would not deny service to any customer in the restaurant.

Indiana at the time was already in the national spotlight for its controversial Religious Freedom Restoration Act. The pizza shop owners’ comments soon went viral, and media outlets such as the Washington Post, CNN and Fox News descended on Walkerton, using Memories Pizza as a focal point for the controversy over Indiana’s law.

Nobody ever asked to have a pizza shop cater their gay wedding, but the owners leveraged the outrage into a massive $840K+ windfall via a GoFundMe campaign launched by right wing shrieker Dana Loesch.

Last year the shop’s owner faced off against a gay couple on Fox News host Jeanine Pirro’s You The Jury show, which was canceled after two episodes. It doesn’t appear that his episode ever aired.

Also last year, homocon asshole supreme Milo filmed an appearance at the shop to “apologize on behalf of the normal gays.” That clip is on YouTube in case you’re feeling masochistic this morning.