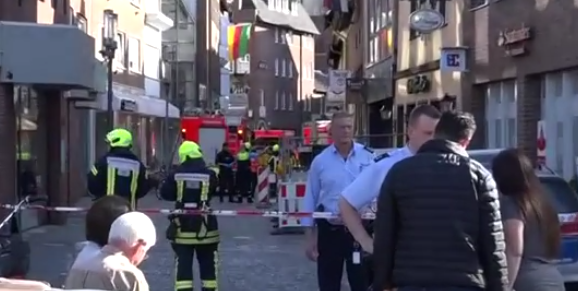 Several people have been been killed in the city of Muenster, in western Germany after a van drove into pedestrians. The driver of the vehicle has killed himself, police said.

About 30 people are reported injured in the incident, which occurred near the Kiepenkerl statue in the old town. Police asked people to avoid the city centre while they respond to the incident.

In December 2016, a lorry plowed into a crowd at at Christmas market in the German capital, Berlin, killing 12 people. There is a restaurant located in the vicinity of the Kiepenkerl statue and photographs posted on social media showed tables and chairs strewn at the scene.

First pictures from Munster after van drives into crowd of people in Germany https://t.co/Iy05wqIgaw pic.twitter.com/KqRovxVTB0

#BREAKING NEWS: Reports of 30 people injured and at least 3 dead after car plows into crowd in #Muenster, Germany. pic.twitter.com/iWKmglKgBC

UPDATE: The driver of the vehicle has reportedly killed himself https://t.co/Rlxa5cQ1Ry

Previous WaPo Analysis: Who Are These Millions Of Protesters?
Next Priest’s Lawyer: That Teenage Boy Seduced My Client