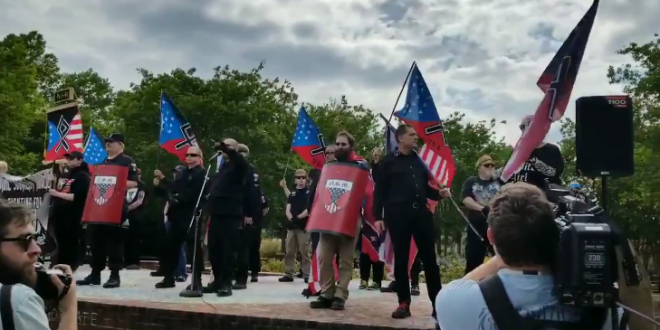 With heavily armed riot police looking on from behind barricades, anti-fascist demonstrators held signs and chanted Saturday to protest a planned rally by neo-Nazis in Newnan, Ga. It appeared to be the largest face-off between the groups since clashes at Charlottesville last year that left one person dead.

Members of Antifa, the loose-knit anti-fascist movement, gathered along the sidewalks on streets leading to Greenville Street Park where the rally by the National Socialist Movement was set to begin at mid-afternoon. At the outset, police arrested several anti-fascist demonstrators, apparently for wearing masks.

Shortly after 4 p.m., about 60 neo-Nazis were allowed into the park through a passageway opened by police in the fence. About 30 people, most of them dressed in black, took the stage at the pavilion, displaying flags. Two men held a banner reading “Fighting for a Better Tomorrow.” They carried flags and shields with red-white-and blue markings and swastika-like symbols. One sign disparaged Jews and African-Americans and claimed Jews were behind the refugee movement.

As the small contingent of neo-Nazis held its demonstration in Greenville Street Park, the hundreds of counterprotesters – kept separated by an 8-foot fence and dozens of rifle-carrying police – booed the group and shouted, “You lost, get over it,” “Newnan strong,” and “Shame on you!”

The far-right hate group demonstrated in the Greenville Street Park, a few blocks from Newnan’s court square. The group’s application anticipated between 50 and 100 people, but it appeared Saturday that only a couple of dozen of them showed up. The counterprotesters, however, appeared to number in the hundreds.

I just witness the most over-aggressive policing I’ve ever seen in #Newnan. Tackling protesters and arresting them… for wearing masks. pic.twitter.com/Mf1e5cfKH2

The Nazis’ sound system was cut off and they were kicked out of the park promptly at 5pm, when their permit ended #Newnan pic.twitter.com/13vNi0PLxG

The Nazis in #newnan today have been more effective at rallying counter protesters and media than themselves. pic.twitter.com/DCbsxIhgVZ

About 25 neo Nazis preparing to start their event. This is what they’re seeing on the other side of the fence and police line. @FOX5Atlanta pic.twitter.com/5YcWOCL08Z

Unarmed protesters, protesting Nazis in their streets. Thank God militarized police were there to point assault rifles at them in defense of White supremacy. 🇺🇸 #Newnan pic.twitter.com/HYZ3Uoso2T

#Nazi in #Newnan Let’s #Retweet and let the world see him in his glory. pic.twitter.com/2Bih7p5hVU