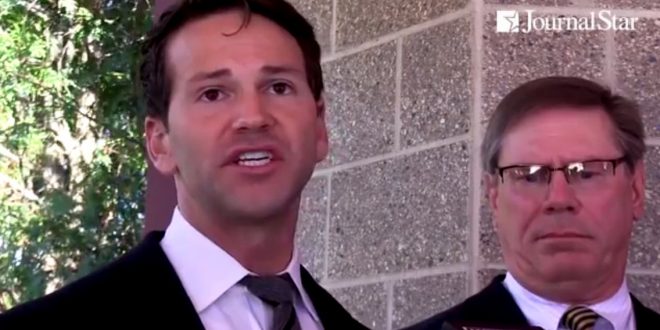 The federal indictment hanging over the head of former congressman Aaron Schock repeatedly references the official rules of the U.S. House of Representatives. Trouble is, some of them are pretty vague. Or so says Schock. And his attorneys insist the judicial branch has no business deciding what they really mean. To do so would be a violation of the separation of powers.

That’s the argument the former rising star and his legal team took to the 27th floor of Chicago’s federal courthouse Wednesday. There, they called on the 7th U.S. Circuit Court of Appeals to reverse a lower court judge and toss Schock’s indictment. Dressed in a blue suit and sitting in the gallery of the appellate courtroom, Schock pursed his lips and sat at times with his hands folded as the panel confronted his lawyer skeptically.

Several courts have agreed the Constitution bars prosecutors, as members of the executive branch, from charging legislative branch members based on unclear congressional rules. the AP reported. Courts have ruled that they can be charged based on clear rules that require no interpretation.

The indictment from 2016 said Schock broke various federal laws when he used campaign and federal cash to reimburse himself for car mileage he allegedly did not drive, stocks, and a charter flight to see the Chicago Bears play, among other expenses. He is also accused of falsifying records and receipts in trying to cover up questionable expenses.

The three-judge panel appeared convinced that there was little ambiguity in the House’s mileage reimbursement rules, even if Schock had some wiggle room with regard to his request for reimbursement for furniture.

“There are some rules that are more solid,” Judge Wood said, giving the air a little poke with her pen, “like, don’t lie about your mileage. I can’t fathom what else it could possibly be,” she said, prompting a general chuckle from the bench.

A ruling in the case is expected this summer.

RELATED: Last August, Schock’s attorneys expressed outrage after prosecutors questioned his sexuality and whether he had actually dated the woman Schock now refers to as his ex-girlfriend. At issue, in that instance, is whether a “staff photographer” listed on his expense reports might be his boyfriend.