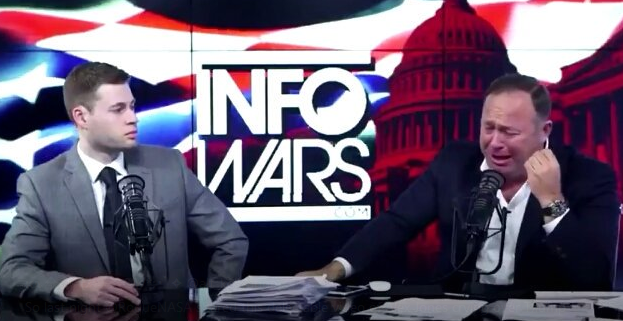 President Donald Trump’s announcement that the U.S. was joining France and Britain in a coordinated airstrike against Syria broke Alex Jones. “What the fuck!” Jones shouted, pounding his fist on the table. “Is there nobody fucking pure in this goddamned fucking world?!”

“You fucking goddamn degenerate fucks!” Jones said. “I shouldn’t be on air right now.” And then, while invoking his ex-wife’s custody of their kids, Jones wept.

“They said if you just turn against Trump it would be better, but he was doing good, and that’s what makes it so bad,” Jones said, breaking down. “If he had been a piece a crap from the beginning it wouldn’t be so bad. But we made so many sacrifices. And now he’s crapping all over us it makes me sick.” His co-host looked on, concerned.

Ann Coulter spent the evening retweeting criticism of the strike, remarking on Twitter that former Virginia Gov. Terry McAuliffe might beat Trump in 2020 “if you promised no more ‘stupid wars.’”

Michael Savage, a popular conservative radio talk show personality, livestreamed himself at dinner blasting the president, saying that America had become “a nation of idiots” in the wake of the attack. “My opinion is that this is the greatest disaster of the Trump presidency,” Savage said while pointing the camera at a plate of beans.

Infowars founder Alex Jones, a former libertarian Ron Paul supporter, launched into several conspiratorial rants about the nature of the strike, breaking down in tears and railing against Trump and Secretary of Defense James Mattis. “Fuck Trump, and fuck these fucking people,” Jones said.

The video is really something, even for Jones.

Trump’s anti-interventionist base, in this case, Alex Jones, reacts badly to Syria intervention: “Is no one pure in this world?…. F**k Trump!” pic.twitter.com/lBPVctVS1G

At least I won’t feel bad when he gets impeached.

Hundreds of millions wasted for a pointless attack that risked a lot but achieved nothing.

I’ve said it before and I’ll say it again. Our track record of intervening in Syria and the Middle East is terrible.

Americans should not die fighting a war that’s NOT OURS TO FIGHT. #syria

I’m here for Alex Jones losing his mind and feeling betrayed by Trump on live stream. “Trump may have been under mind control” l o l pic.twitter.com/L9ypiKLolL

Alex Jones now says he’s done with Donald Trump. If the two of them split up, who’s going to get custody of the lizard kids?

I agree with Alex Jones. https://t.co/IPC4Z8WCYb

I took a photo with a Trump Halloween mask covered in Ketchup and as a result was the subject of a two-month long Federal investigation. What is Alex Jones gonna get for saying this? pic.twitter.com/naGyAkrBQo

Alex Jones is literally crying: “We made so many sacrifices and now he’s crapping all over us. It makes me sick.”