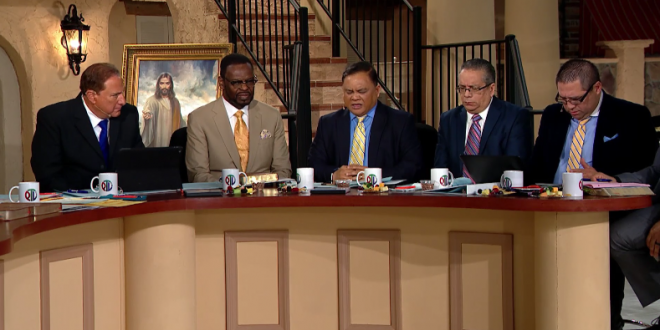 When tsunami-stopping and ant-reviving pastor Frank Amedia appeared on “The Jim Bakker Show”, he was joined by several members of his POTUS Shield organization, who collectively engaged in an extended prayer to protect President Trump from the “evil forces” of the deep state, in addition to the “witches and warlocks” who have been cursing him.

“We lift up witches and warlocks who have been a part of this assignment,” [Bishop Harry] Jackson said, “as they have gathered in numbers almost immeasurable to curse this specific president.”

“We cancel, we bind their authority, we bind their curses, we lift up your word that says you shall not revile the gods and neither shall you bring a curse upon the rule of God’s people. We declare those assignments null and void and we claim the souls of many of the witches and warlocks.”

RELATED: Longtime JMG readers may recall that in 2012 Harry Jackson claimed that he laid his hands on a pile of copies of the the LGBT newspaper The Washington Blade and “cursed them” into bankruptcy. The Blade remains in operation.