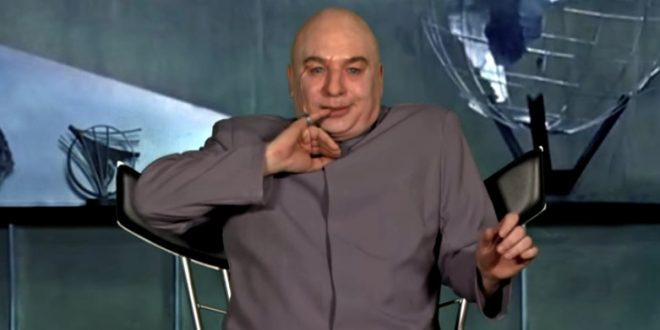 Dr. Evil: The Border Wall Was My Idea [VIDEO]

Zip it, everyone — Dr. Evil is back! The menacing antagonist (played by Mike Myers) from the Austin Powers films appeared on The Tonight Show Wednesday for an exclusive interview. Jimmy Fallon told viewers his guest had been “fired by Trump moments ago.”

“I’ve got to say, I had no idea that you were part of the Trump administration,” a surprised Fallon said in the NSFW segment. “What exactly did you do there?”

“Well naturally, I was going to be secretary of evil. But Steve Bannon got that job,” Dr. Evil said, bringing his pinky to his mouth.

He said his role in the administration was that of “an ‘ideas guy'” and that the proposed wall along the Mexican border could be attributed to him.