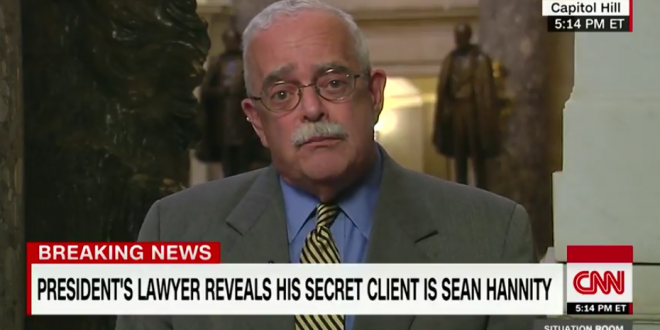 “Sean Hannity has been among the lowest of the low, wrestling in the mud of birther conspiracy, Seth Rich conspiracies about the young man who was murdered here in Washington.  All kinds of conspiracy theories about Hillary Clinton, and distributing false and fake news left and right. Now what we learn is he’s defending the president’s lawyer on television, he has a conflict of interest and ethical conflict of interest. I think they ought to fire Sean Hannity. I think he is so into this, like a pig in the mud, he can’t get out of it and I think he deserves to be fired. His word could never again be trusted given the fact that he consciously did not reveal this relationship.” – Democratic US House Rep. Gerry Connolly, speaking tonight on CNN.

Previous Fox Host Defends Hannity: Hoping That Somebody You Don’t Like Gets Destroyed Shows How Petty You Are
Next CHATTER AWAY: Overnight Open Thread