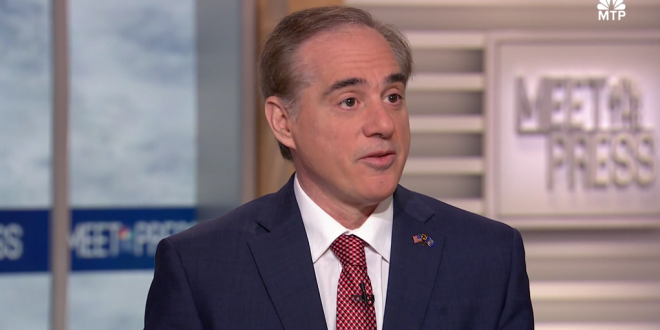 David Shulkin: No, I Did Not Resign [VIDEO]

Former Veterans Affairs Secretary David Shulkin on Sunday denied he resigned his position. In an interview on NBC’s “Meet the Press,” the ousted VA chief again argued he was undermined by elements of the Trump administration seeking to privatize services for veterans and said his potential successor, Rear Adm. Ronny Jackson, would need “a good team around him” to be successful.

The White House has said Shulkin resigned from the VA. But pressed by moderator Chuck Todd on the nature of his departure, Shulkin denied he was asked to submit a letter of resignation. “We actually spoke the day that he sent the tweet out just a few hours before,” Shulkin said of Trump. “And we talked a lot about issues at VA that were important and how we could continue to make progress on policy issues.”

THIS MORNING: Recently fired Secretary of Veterans Affairs, @SecShulkin says that President Trump firing him over Twitter came as a surprise. #MTP https://t.co/vYCLTex6RW

Previous Trump: Mexico Is Laughing At Our Immigration Laws
Next FLORIDA: Man Rants About Immigrants On Way To Celebrate Jesus With Immigrant Wife He Cheated On