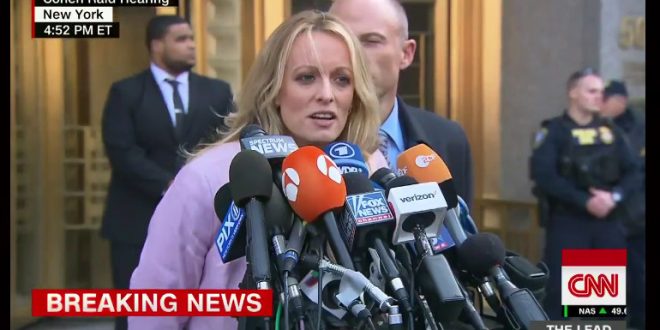 Court Rejects Cohen’s Bid To Keep FBI Out Of His Files, Avenatti Says Cohen Threw Hannity Under The Bus

A federal judge rejected a request from President Donald Trump and his personal lawyer Michael Cohen for a temporary restraining order that would have kept federal prosecutors from reading files seized in raids last week.

Judge Kimba Wood said a government taint team can weed out privileged documents, but she left open the possibility an independent third party could play a role at a later time, in the interest of “the perception of fairness.”

“I have faith in the Southern District prosecutors, that their integrity is unimpeachable,” Wood said. Her ruling came at the end of a hearing attended by Cohen and Stormy Daniels, who sat feet apart but did not appear to interact.

Stormy Daniels, speaking outside a court hearing in New York, said she and her attorney, Michael Avenatti, are committed to “making sure that everyone finds out the truth and the facts of what happened.” https://t.co/GsOZH7i7fM pic.twitter.com/12v4pMIwfc

Stormy Daniels’ attorney Michael Avenatti says President Trump’s personal lawyer Michael Cohen is “radioactive,” and that “anybody that was associated with him in the last 20 to 30 years should be very, very concerned.” https://t.co/JMLuWzyX3r pic.twitter.com/taRzRPBrFL

Stormy Daniels lawyer Michael Avenatti: “Depending on what is contained within those documents, I think there is significant danger to the president. The president trusted Mr. Cohen as his fixer for years…and I think the chickens are about to come home to roost.” pic.twitter.com/86HjPSmFhe

Avenatti says he and Stormy Daniels are “concerned with their safety” but decided “the risk was more than worth it” #tictocnews pic.twitter.com/jGjmVGyMe9

Michael Avenatti on the reveal of Cohen’s mystery third client: “I think Sean Hannity got thrown under the bus by Michael Cohen’s counsel” https://t.co/n6aYFUZPk8 pic.twitter.com/78pZp6EezP

Previous GOD SAVE THE QUEEN: Sec. Ryan Zinke’s Office Took $200K Estimate For Flag Poles To Signify His Presence
Next Fox Host Defends Hannity: Hoping That Somebody You Don’t Like Gets Destroyed Shows How Petty You Are