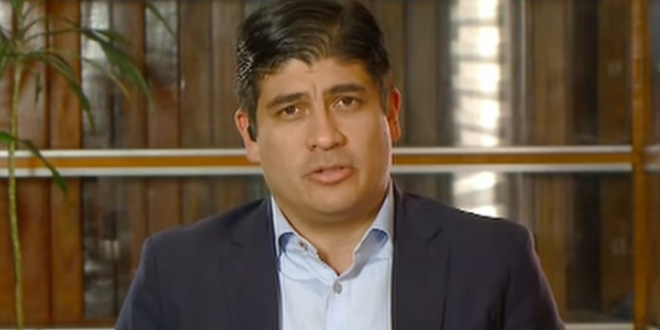 Costa Rica’s governing party won a big presidential election victory Sunday as many voters rejected an evangelical pastor who had jumped into political prominence by campaigning against same-sex marriage.

The head of the Supreme Electoral Council, Luis Antonio Sobrado, said that with 95 percent of ballots counted Sunday night, Carlos Alvarado of the ruling Citizen Action Party had 60.8 percent of the votes in the runoff election. His opponent, Fabricio Alvarado of the National Restoration party, had 39.2 percent. The two men are not related.

Fabricio Alvarado rose from being a political unknown to the leading candidate in the election’s first round in February after he came out strongly against a call by the Inter-American Court of Human Rights for Costa Rica to allow same-sex marriage. Carlos Alvarado, a novelist and former labor minister who finished second in February to get the final spot in the runoff, spoke in favor of letting gays wed.

“We’re not sad,” Fabricio Alvarado told his supporters, gathered before a stage on Paseo Colón in western San José. “We made history.” The former legislator and evangelical preacher thanked his supporters from across party lines and called for unity in his brief remarks.

“No matter what happens, glory be to God,” he said.”We are calm, because our work was worthy, clean, and our message did win these elections… We will continue defending the principles and values that made this country great.”

Costa Rica’s election just finished and they rejected their version of Donald Trump in favor of sane candidate Carlos Alvarado.

Evangelical preacher Fabricio Alvarado concedes defeat in the presidential elections in #CostaRica. Carlos Alvarado is the winner with 60.6% of the vote @cnni

Previous CHATTER AWAY: Overnight Open Thread
Next Trump: DACA Is Dead Because Of The Democrats