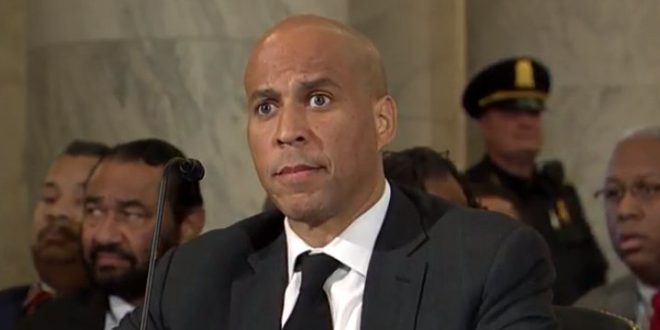 Sen. Cory Booker (D-NJ) had positioned himself as a champion of gay rights in his opposition to Mike Pompeo to become secretary of state, then on Thursday he voted against Richard Grenell, the Trump administration’s first prominent openly-gay nominee, for U.S. ambassador to Germany. Grenell’s nomination was confirmed by the Senate anyway, in a 56 to 42 vote, making him the highest-ranking openly gay official in a Republican administration ever.

Booker’s hypocrisy was on full display on Thursday, after he opposed Pompeo’s confirmation based on his gay marriage views, and then opposed the confirmation of Richard Grenell as U.S. ambassador to Germany. As an ambassador, Grenell would be doing exactly what Booker stated was so important — representing America at a time of “untold persecution.”

Gregory T. Angelo, the president of Log Cabin Republicans, who called Democratic senators to secure support for Grenell, said some Democrats were posturing for future presidential runs. “There are Democratic senators who have informed me and our office that they would be opposing Grenell. Most of them are grandstanding Democrats with quixotic intentions of challenging Donald Trump for the presidency in 2020,” he said before the vote.

“@LogCabinGOP will not forget the votes of @SenateDems who stood in opposition to @RichardGrenell ‘s confirmation, nor the roaring silence from #LGBT advocacy organizations who did nothing to achieve this milestone in LGBT history,” said @gregorytangelo. https://t.co/xNRAInBfZ1