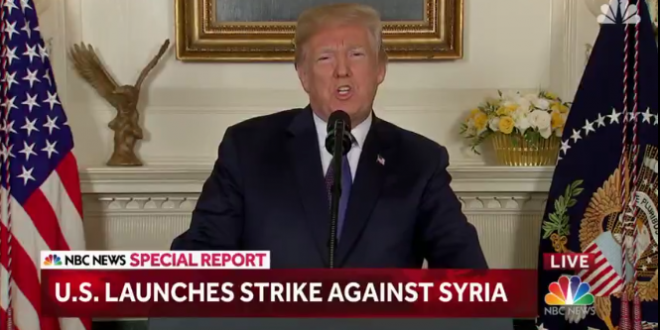 President Trump said on Friday he had ordered strikes on Syrian targets, seeking to punish President Bashar al-Assad for a suspected chemical attack near Damascus that killed more than 40 people. Mr. Trump said Britain and France had joined the United States in the strikes.

The strikes risked pulling the United States deeper into the complex, multi-sided war in Syria from which Mr. Trump only last week said he wanted to withdraw. They also raised the possibility of confrontation with Russia and Iran, both of which have military forces in Syria to support Mr. Assad.

In choosing to strike, it appeared that Mr. Trump’s desire to punish Mr. Assad for what he called a “barbaric act” — and make good on his tweets promising action this week — outweighed his desire to limit the United States’ military involvement in the conflict, at least in the short term.

1. Trump hires new attorney, argues for temporary restraining order against his own DOJ in court

Previous Tony Perkins: Mike Pompeo Is A Ray Of Anti-Gay Hope After Years Of Obama’s Harassment Of Christians
Next CHATTER AWAY: Overnight Open Thread