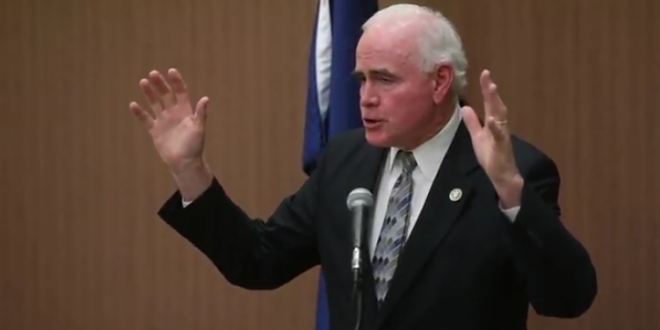 Republican Rep. Pat Meehan (R-PA), who represents Pennsylvania’s 7th congressional district, announced Friday that he will resign his seat. The embattled lawmaker previously said he would not seek re-election following revelations that he used taxpayer funds to settle a sexual-harassment claim.

Meehan’s district, previously drawn in moose antler fashion around Philadelphia was redrawn for November’s midterm elections, taking it from a district that favored Hillary Clinton by two points to one that would have favored her by some 28 points.

“With the knowledge I would not be standing for another term, I have decided that stepping down now is in the interest of the constituents I have been honored to serve. I have stayed to fight for important priorities like fully funding our troops, increasing support for medical research and preserving promising clean energy solutions. And now that work is accomplished.

“While I do believe I would be exonerated of any wrongdoing, I also did not want to put my staff through the rigors of an Ethics Committee investigation and believed it was best for them to have a head start on new employment rather than being caught up in an inquiry. And since I have chosen to resign, the inquiry will not become a burden to taxpayers and committee staff.

“I will pay $39,000.00 to the U.S. Treasury to reimburse for the severance payment that was made from my office account. That payment will be made within 30 days of my resignation from the House of Representatives. I did not want to leave with any question of violating the trust of taxpayers.

“Though I wish my time in Congress would have finished in a more satisfying manner, I am proud of our accomplishments and thank the residents of my District for their confidence in me over the last eight years. I recognize that there are constituents who are disappointed in the manner in which I handled the situation that lead to my decision not to seek re-election and wish I had done better by them.”