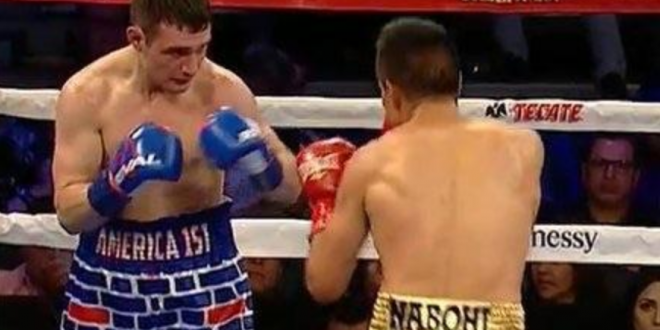 American boxer Rod Salka lost a six-round bout to Mexican fighter Francisco Vargas last night. Salka, who is known for having been brutally knocked out by Danny Garcia in 2014, entered the ring wearing trunks with an anti-immigrant message. The top of Salka’s trunks had “AMERICA 1ST” written on them, and they were patterned like a brick wall. Vargas dominated the fight, sending Salka to his knees with an uppercut in the fifth round, and then landing a series of punches in the sixth round that opened a cut around Salka’s left eye.

Salka’s trainers threw in the towel after that.

Rod Salka wore “America 1st” and a wall pattern on his trunks against Mexican fighter Francisco Vargas, and ended up getting his ass kicked #boxing pic.twitter.com/CmNfIeU6X1

‘Noooooo! Salka get off your stool ! ‘ pic.twitter.com/D1RPX6ZfyI

Congrats Vargas! Is it me or are you too thinking that maybe it wasn’t a good choice for Salka to go with the America 1st-red/white/blue “brick wall” shorts against Vargas? Got a beat down. #justsaying @GoldenBoyBoxing @ESPNDeportes #boxing