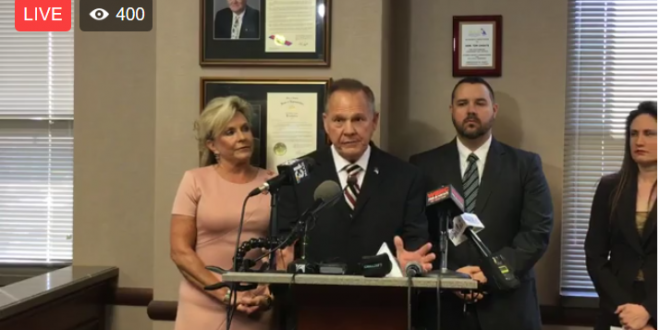 Roy Moore continues to fight those he says conspired against him in the U.S. special Senate election. On Monday, Moore’s attorney fired a legal shot directly at his accusers. Roy Moore says there was an orchestrated political conspiracy against that caused him to lose the election.

At a news conference held in Etowah County, his attorney confirmed they have filed a legal complaint in Etowah County. That complaint centers on Richard Hagadorn, Margaret Corfman, Debbie Gibson, Beverly Nelson, and Tina Johnson. Moore and his legal teams claim that $40 million dollars was spent in an effort to beat him.

Moore’s campaign for the Senate was marred by accusations made by several women against Moore of unwanted romantic and sexual advances. The women said they were in their teens and Moore was in his 30s during their encounters.

The most serious accusation came from Leigh Corfman, who said when she was 14, Moore – then a 32-year-old assistant district attorney — took her to his home in rural Etowah County, removed her clothing and touched her over her underwear.

Corfman also said Moore guided her hand to touch him over his underwear. Corfman filed a defamation lawsuit against Moore in January and Moore filed a counter lawsuit against Corfman in April.

I have no plans to run for public office, Roy Moore says.

“Judge Moore is about the truth. He has no gain at this point. The election is over. But his reputation has suffered,” Moore attorney Jeremy Richards says.

“That’s something I can’t say. I can say it didn’t help,” Moore on if he would have won Senate election without allegations. “I’m fueled by the truth.”

Attorneys on other side of case from SF, DC and Bham. You think it’s not political? You have to raise money, yes (in question to whether he will continue to seek funds from supporters)