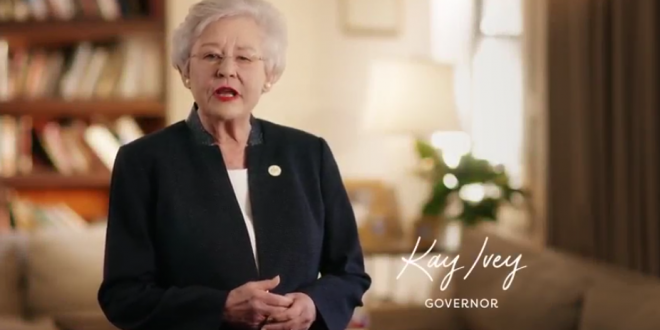 Alabama Gov Campaign Ad: We Don’t Need Out Of State Liberals Telling Us To Tear Down Our Monuments

Alabama doesn’t need “folks in Washington” or “out-of-state liberals” instructing the state on what it should do with Confederate monuments, Gov. Kay Ivey said Tuesday. Ivey, during a campaign appearance in Foley, defended a new campaign ad released earlier in the day that touted the Alabama Memorial Preservation Act of 2017, which she signed into law less than 11 months ago.

“I believe the people agreed with that decision and support in protecting our historical monuments,” Ivey said after speaking at a Baldwin County Young Republicans function. Her appearance also occurred one day before the Reckon by AL.com GOP governor’s debate at 7 p.m. Wednesday at the Lyric Fine Arts Theatre in Birmingham. Ivey said she does not plan to attend. “We can’t and shouldn’t even try to charge or erase or tear down our history. We must learn from our history,” Ivey said.

Ivey became governor last year when her family values Christian predecessor went down in a classically Republican sex scandal with a much younger employee.