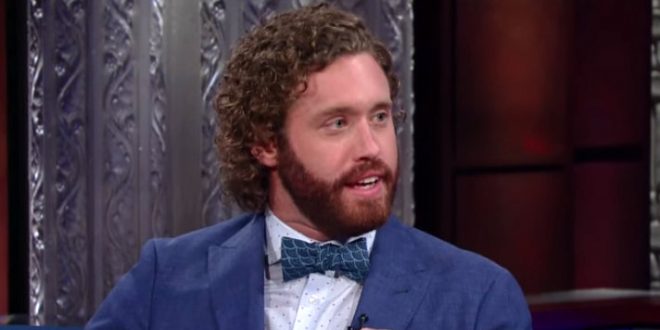 Former Silicon Valley star T.J. Miller has been charged with calling in a false bomb threat from an Amtrak train, federal authorities say. Miller was arrested Monday night at LaGuardia Airport in Queens, New York. Miller appeared today before U.S. District Judge Jeffrey A. Meyer in New Haven and was released on a $100,000 bond. The charge carries a maximum term of five years in prison.

According to a press release from authorities, the actor allegedly called 911 on March 18 in New Jersey, and reported that he was on an Amtrak Train traveling from Washington, D.C., toward New York City’s Penn Station, and that a female passenger “has a bomb in her bag.” A bomb squad found no evidence of any explosive devices on the train.

The officer who spoke to the comedian — who changed kept changing his description of the woman — suspected that Miller was under the influence of alcohol. Miller told the officer, “This is the first time I’ve ever made a call like this before. I am worried for everyone on that train. Someone has to check that lady out.”

Investigators found that the “Emoji Movie” star had actually been traveling on a different train than the one reported. The complaint alleges that Miller, motivated by a grudge against the subject female, called 911 to relay false information about a bomb on the train.

Multiple federal and state anti-terrorism task forces are involved in the case. Miller, for his part, is tweeting away as if nothing happened.

What up Philadelphia. Illadelphia. Me and @CJSullivan_ are about to wreck it this weekend. My girl Cork is on the case, @HeliumComedy is the jam. And peanut butter.
See you there. MOST ALL SHOWS SOLD OUT so get them fixed fast. #roadrunner https://t.co/0YIOzL6wvd

Honestly, the buried lede in the TJ Miller story is that a passenger called in a bomb threat about an Amtrak train that was in New Jersey and the cops didn’t reach it until it was in Westport, Connecticut.

“The complaint further alleges that MILLER, motivated by a grudge against the subject female, called 911 to relay false information about a suspected bomb on the train, and continued to convey false information to investigators while the public safety response was ongoing.” OKAY! https://t.co/BGIeeuBT76

TJ Miller got drunk on a train, got into an argument with a woman, and then called in a hoax bomb threat on her. He is now facing prosecution for a federal crime with a maximum 5 year sentence https://t.co/5C7ID3Iozl