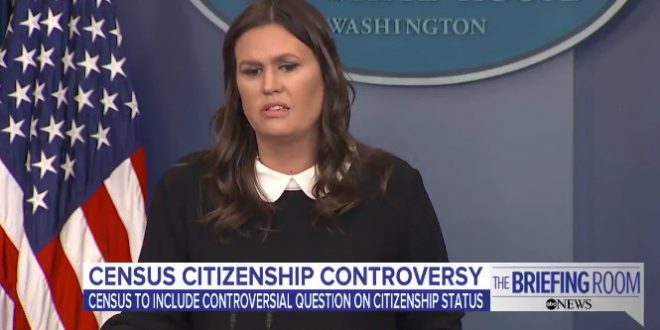 Sarah Huckabee Sanders just told a whopper in defense of the GOP’s attempt the suppress the minority vote.

The Commerce Department is reinstating a citizenship question to the 2020 Census for the first time in decades, a move that some arguewill lead to an undercount of minorities living in the United States. The U.S. Census Bureau counts the total number of people in the country — not the total number of citizens — every 10 years. Though it usually doesn’t ask about a person’s citizenship status, the Justice Department asked the agency late last year to include the question. It is the first time the government has done that in 70 years.

The Census count is used to redraw congressional districts, so it can affect the makeup of Congress, and to determine where federal, state and local funds will be used to build new schools, roads, health care facilities, child-care centers and senior centers. It also forms the basis of countless government and academic studies that drive public policy decisions and legislation from Washington, D.C., to statehouses and city halls.

Sarah Sanders said repeatedly today that every census since 1965 has included Q about immigration status, except 2010. That is false. The question hasn’t been asked in a full census since 1950 out of fears of squirreling the results. For more: https://t.co/EFYI4JmTg3

White House on Census: “This was a question that was included in the U.S. Census since 1965 with the exception of 2010 when it was removed.”

Wrong. Sample American Community Surveys have included it, but it hasn’t been on the full form census since 1952. pic.twitter.com/pEuGSF8rco

Sanders says a citizenship question has been on every census since 1965.

Citizenship hasn’t been questioned on a decennial census since 1950: https://t.co/xwx10yrUeH pic.twitter.com/siAIF8lCIk

RE: the Census, @PressSec says citizenship has been asked every year since 1965 except 2010. But she is referring to the smaller American Community Survey, which isn’t used to determine congressional representation. It’s been 50 years since main Census asked about citizenship.

Previous BRITAIN: Whistleblower Testifies That Pro-Brexit Groups Had “Common Plan” To Evade UK Election Laws
Next Evangelicals Blast Trump For “Immoral” Spending Bill (But He Still Gets Mulligans For All That Adultery)