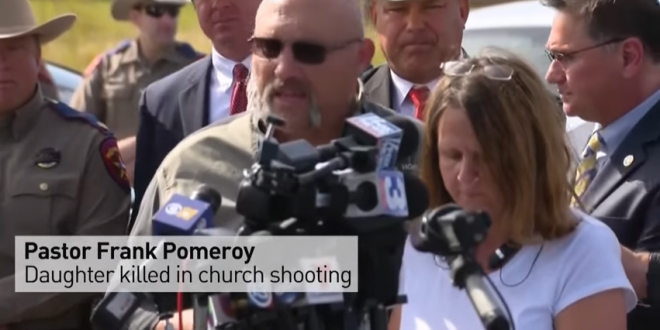 Two conspiracy theorists who have pushed the idea that the mass shooting at Sutherland Springs on Nov. 5 didn’t happen were arrested Monday at First Baptist Church, the site of the massacre, after the church’s pastor accused them of repeatedly harassing the community.

The Wilson County Sheriff’s Office declined to provide charging information on Robert Ussery, 54, who founded conspiracy website Side Thorn, and his partner Jodi Mann, 56, who is referred to as “Conspiracy Granny” online. The booking process was not complete Monday evening and no information would be made available until Tuesday, a supervisor there said.

“He said, ‘Your daughter never even existed. Show me her birth certificate. Show me anything to say she was here,’” Pomeroy said. “I just told him there was enough evidence already visible, so if he chooses not to see that, how would I know he would believe anything else?”

Ussery reportedly threatened to hang the victim’s father and urinate on his corpse for participating in a government-orchestrated false flag.

Previous FLORIDA: Clinton HHS Secretary To Run For US House
Next Cher Apologizes For Selfie With Australian PM