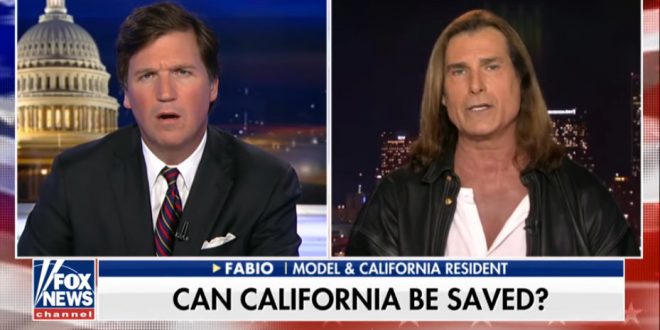 Twitter lit up over model Fabio Lanzoni’s appearance on Fox News’ “Tucker Carlson Tonight” on Thursday. Carlson ostensibly invited Lanzoni, famous for gracing the covers of romance novels in the ’80s and ’90s, to talk about California’s economy and homelessness.

But the interview soon took a bizarre turn, as Lanzoni began ranting the Golden State now looked like “the Wild, Wild West” and was worse than a Third-World country 30 years ago. Lanzoni likened the public library in downtown Los Angeles to “Sodom and Gomorrah,” the infamously immoral biblical cities.

please let us never forget this segment when Fox personalities go after athletes, musicians and Hollywood actors for expressing their political opinions. https://t.co/5FpKlVGNyM

At last we know who will replace @stevenmnuchin1 when he’s fired. https://t.co/4WbCqSsB4r

Where’s Fabio? Someone get me Fabio so I can make sense of all this. Help me Fabio! pic.twitter.com/Ts46SjDO5w

Tucker Carlson bringing Fabio on as an expert on the California economy is the most Onion story ever. https://t.co/FwORQ2Zimx