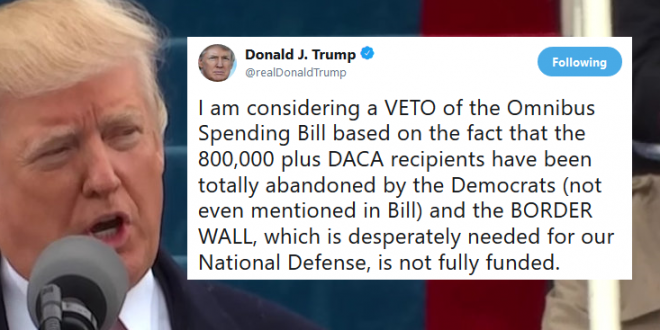 President Trump said he might veto the sweeping $1.3 trillion spending bill passed early Friday — a move that would likely lead to a government shutdown — because it does nothing to address the fate of young undocumented immigrants and does not fully fund his border wall.

In a morning tweet, Trump said that those protected from deportation by the Obama-era Deferred Action for Childhood Arrivals program have been “totally abandoned” by Congress, and he blamed Democrats. On Thursday afternoon, senior Trump administration officials told reporters that Trump intended to sign the spending bill, making no mention of the president’s concern.

Trump, who has sought to cancel the program, was seeking a deal that would give Democrats protections they sought for DACA recipients in exchange for additional funding for his long-promised U.S.-Mexico border wall.

I am considering a VETO of the Omnibus Spending Bill based on the fact that the 800,000 plus DACA recipients have been totally abandoned by the Democrats (not even mentioned in Bill) and the BORDER WALL, which is desperately needed for our National Defense, is not fully funded.

Just ran into @SenatorLankford giving a Capitol tour. I told him about the Trump veto threat. He thought I was joking.

Why did Trump suddenly decide to criticize the spending bill, threaten a veto? We don’t know yet, buttttt: it was criticized on Fox and Friends this morning. https://t.co/YLaY2DWl9Z

On Fox & Friends this morning, Pete Hegseth said of the omnibus, “this is a swamp budget, this is a Mitch McConnell special,” savaged it because “no wall.” pic.twitter.com/tTAIWj5til

Now we know why Trump tweeted he might veto the bill. Fox & Friends running the country… https://t.co/gUcuK9uInQ