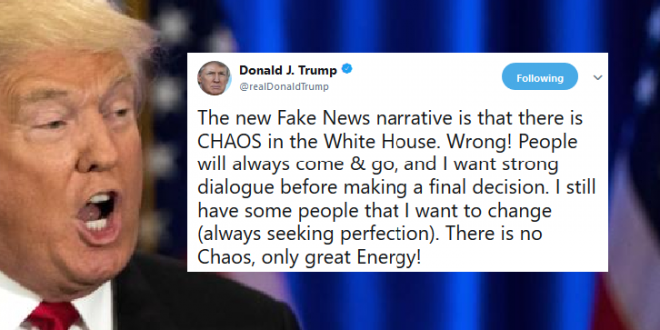 Trump: There’s No CHAOS In The White House!

President Donald Trump reacted to another round of reporting about White House “chaos” by pretending to be the pragmatic businessman he played on “The Apprentice.” Former Trump campaign aide Sam Nunberg repeatedly self-immolated Monday on live TV as he challenged a subpoena to appear before a grand jury in the special counsel’s Russia probe, as the president’s most trusted advisers leave the White House

The new Fake News narrative is that there is CHAOS in the White House. Wrong! People will always come & go, and I want strong dialogue before making a final decision. I still have some people that I want to change (always seeking perfection). There is no Chaos, only great Energy!

Trump said Sat night at the Gridiron: “I like turnover. I like chaos. It really is good.” https://t.co/f6WuQV0VsL