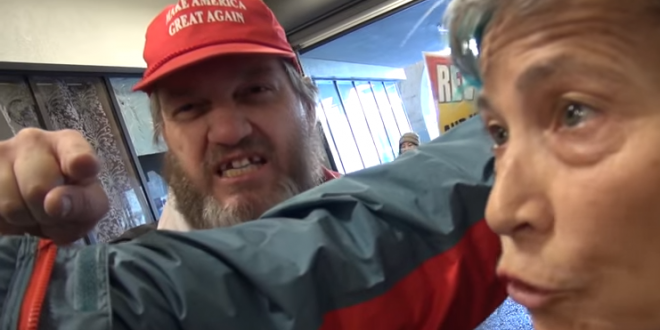 Ten times in the last six month, Revolution Books, the far left bookstore in the Telegraph Channing Mall, has found itself under attack from far-right activists. The latest skirmish was March 4th when a group of people who called themselves “Berkeley Warriors” on a live Facebook feed came from Sacramento and stormed the store.

“Fucking Commie scum,” one demonstrator, Rob Cantrall, said on a video taken by bookstore staff while Reiko Redmonde, a volunteer manager at the store, tried to prevent him and others from entering. “You are commie scum. We are going to burn down your bookstore. You know that, right?”

Cantrell, who is from Los Angeles, was joined by his partner of about two weeks, Lauren White, who also goes by the name Lauren Order. “Infiltrating Berkeley’s Marxist Hive w/ Jacob Ku & Rob Cantrall, ” White wrote on Facebook. Alexandra Davis, Jourdin Davis, and James Ian were also there, according to the group’s Livestream and various Facebook pages.

It appears that these assholes are affiliated with the Proud Boys, who recently earned gushing praise from the North Carolina-based Gays For Trump.

.@kron4news covers fascist attacks on @RevolutionBksB, the political & intellectual center of a movement for an actual revolution & a new communism. This bookstore is about everything these fascist hate.

We support @RevolutionBksB! If you’re in Berkeley, stop by, buy a book. https://t.co/zzXM9M6xCm

Previous NFL Prospect: I Was Grilled About My Sexuality
Next Trump Demands China Reduce Trade Deficit By “One Billion Dollars” (He Meant To Ask For $100 Billion)