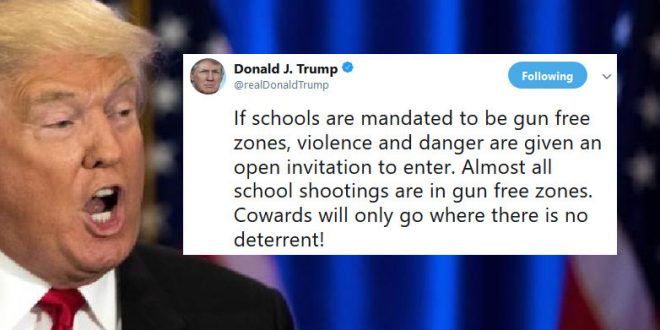 Trump: Schools Should Not Be Gun-Free Zones

President Trump on Monday said his administration is pushing reforms to gun laws and school safety measures similar to the initiatives Florida made to its policies.

Over the weekend, the Justice Department announced a new regulation proposal that would ban bump stocks. The Office of Management and Budget must approve the request, which would include the term “bump stock” under the National Firearms Act and Gun Control Act’s definitions of machine guns.

….On 18 to 21 Age Limits, watching court cases and rulings before acting. States are making this decision. Things are moving rapidly on this, but not much political support (to put it mildly).

If schools are mandated to be gun free zones, violence and danger are given an open invitation to enter. Almost all school shootings are in gun free zones. Cowards will only go where there is no deterrent!

Previous Dem Rep: DeVos Is Dumber Than A Bag Of Hammers
Next Fashion Legend Hubert De Givenchy Dies At Age 91