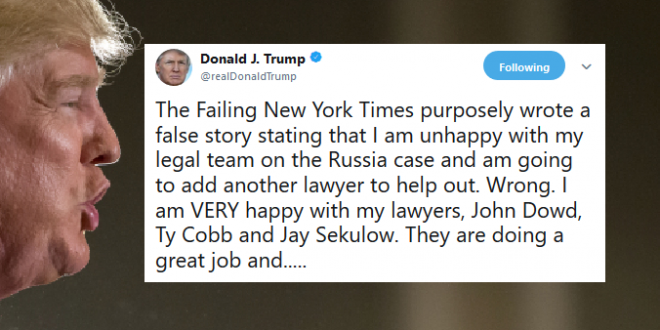 Here’s the report that spawned this morning’s freak out:

President Trump is in discussions with a veteran Washington lawyer who represented Bill Clinton during the impeachment process about joining the White House to help deal with the special counsel inquiry, according to four people familiar with the matter.

The lawyer, Emmet T. Flood, met with Mr. Trump in the Oval Office this past week to discuss the possibility, according to the people. No final decision has been made, according to two of the people. Should Mr. Flood come on board, the two people said, his main duties would be a day-to-day role helping the president navigate his dealings with the Justice Department.

Mr. Flood would not replace Ty Cobb, the White House lawyer who since the summer has taken the lead role in dealing with the special counsel, Robert S. Mueller III. But Mr. Cobb has told friends for weeks that he views his position as temporary and does not expect to remain in the job for much longer.

…have shown conclusively that there was no Collusion with Russia..just excuse for losing. The only Collusion was that done by the DNC, the Democrats and Crooked Hillary. The writer of the story, Maggie Haberman, a Hillary flunky, knows nothing about me and is not given access.

The Republicans are 5-0 in recent Congressional races, a point which the Fake News Media continuously fails to mention. I backed and campaigned for all of the winners. They give me credit for one. Hopefully, Rick Saccone will be another big win on Tuesday.

Previous State TV Host To Divorce Due To Affair With Staffer
Next Elizabeth Warren: I’m Not Running For President