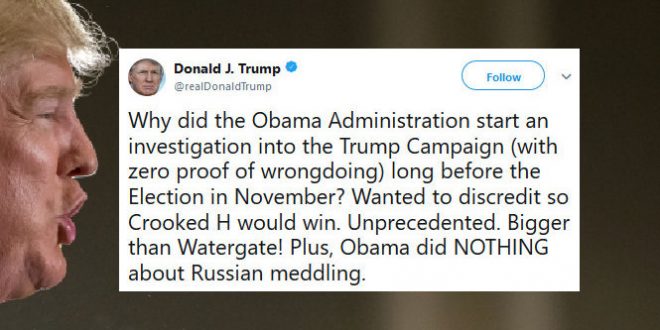 President Trump on Monday railed against the Obama administration, claiming his predecessor tried to discredit Trump’s 2016 campaign while also failing to act on Russian efforts to influence the election.

Trump has previously claimed the Obama administration “did nothing” to stop Russian election interference, particularly after special counsel Robert Mueller filed charges against 13 Russian nationals and three Russian organizations for their role in the meddling.

Obama issued sanctions against Russia for the meddling after U.S. intelligence officials said they had found evidence that the country had hacked U.S. groups and leaked emails in an effort to influence the 2016 vote.

Why did the Obama Administration start an investigation into the Trump Campaign (with zero proof of wrongdoing) long before the Election in November? Wanted to discredit so Crooked H would win. Unprecedented. Bigger than Watergate! Plus, Obama did NOTHING about Russian meddling.