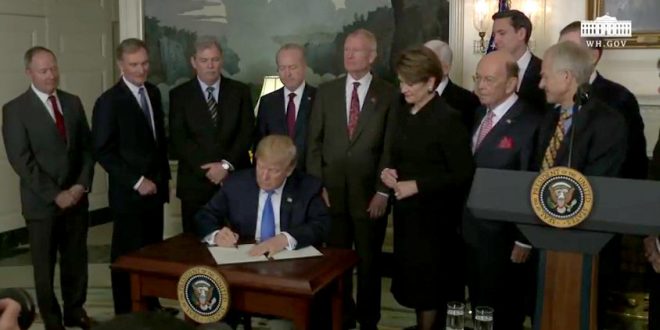 The Trump administration is preparing to impose at least $50 billion worth of tariffs on Chinese imports, in a major escalation of the president’s “America First” trade policy. President Trump is also calling for new limits on Chinese investment in U.S. technology, in an effort to protect what the administration calls America’s “economic seed corn.”

Trump signed a presidential memorandum Thursday directing his trade representative to draw up a long list of Chinese products to which the tariffs would be applied. The list will be made public in 15 days, and the tariffs would take effect after a period of public comment. The president suggested the total value of the tariffs could go as high as $60 billion.

Stocks fell sharply Thursday, March 22, as investors braced for the fallout from $50 billion in tariffs targeted toward China as Donald Trump vowed to lower the U.S. trade deficit with the world’s second-largest economy. Trump announced the new tariffs, which will largely impact consumer technology goods, as part of his broader effort to both trim China’s $375 billion trade surplus and punish the nation for alleged intellectual property violations.