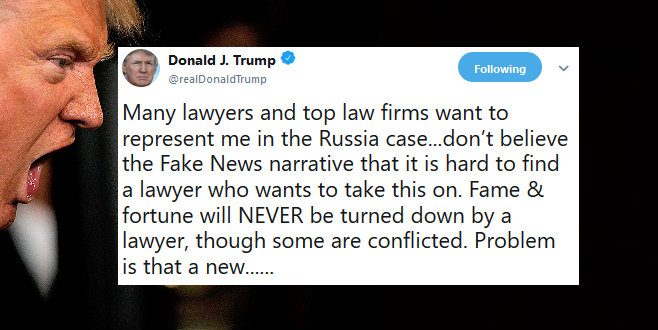 Trump: Many Lawyers Want To Represent Me On Russia

Here’s what has Hair Furor raging this morning:

President Trump, whose top attorney handling the Russia probe resigned Thursday, is struggling to find top-notch defense lawyers willing to represent him in the case, according to multiple Trump advisers familiar with the negotiations.

Some law firms have signaled that they do not want the controversy of representing a divisive and unpopular president, while others have told Trump advisers they have clients with conflicting interests, according to several lawyers and three of the president’s advisers. Several prominent white-collar lawyers also have declined requests to sign on with the president in recent weeks, including former solicitor general Theodore B. Olson.

Many lawyers and top law firms want to represent me in the Russia case…don’t believe the Fake News narrative that it is hard to find a lawyer who wants to take this on. Fame & fortune will NEVER be turned down by a lawyer, though some are conflicted. Problem is that a new……

….lawyer or law firm will take months to get up to speed (if for no other reason than they can bill more), which is unfair to our great country – and I am very happy with my existing team. Besides, there was NO COLLUSION with Russia, except by Crooked Hillary and the Dems!

Because of the $700 & $716 Billion Dollars gotten to rebuild our Military, many jobs are created and our Military is again rich. Building a great Border Wall, with drugs (poison) and enemy combatants pouring into our Country, is all about National Defense. Build WALL through M!

Much can be done with the $1.6 Billion given to building and fixing the border wall. It is just a down payment. Work will start immediately. The rest of the money will come – and remember DACA, the Democrats abandoned you (but we will not)!