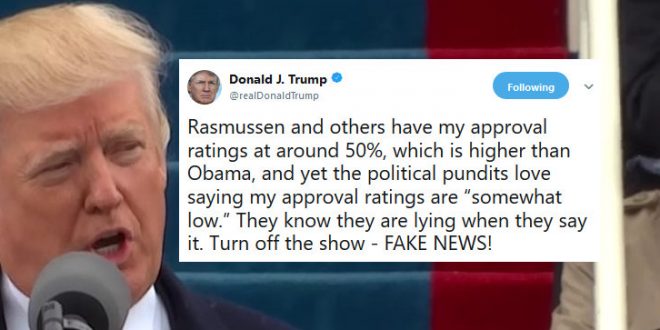 Trump Lies Once Again About His Approval Ratings

RealClearPolitics’ polling average places Trump’s approval at 40.9%, significantly lower than Obama’s approval (48.5%) at the same time during his presidency.

Rasmussen Reports’ latest numbers, from Friday, put Trump’s approval rating at 44% — not “around 50%.” Rasmussen, whose “likely voter” model tends to favor Republicans, also had Obama at 44% on the same day in 2010.

Trump’s numbers have ticked upward, and his current approval rating is higher than the low point of Obama’s presidency (39.8% per RCP). But Trump’s rating remains below the 48% that Obama averaged over 8 years, and far below the 57.2% rating he had when he left office.