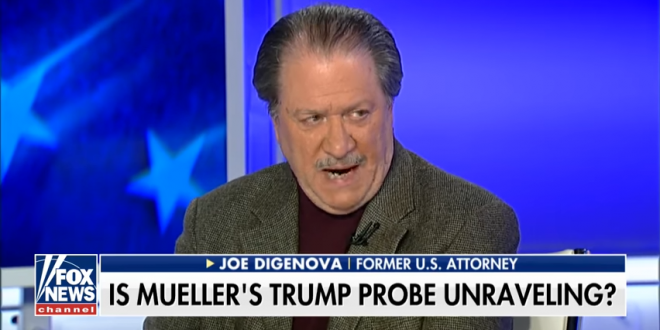 President Trump hired the longtime Washington lawyer Joseph E. diGenova on Monday, adding an aggressive voice to his legal team who has pushed the theory on television that the F.B.I. and Justice Department framed Mr. Trump.

Mr. diGenova, a former United States attorney, is not expected to take a lead role. But he will serve as an outspoken player for the president as Mr. Trump has increased his attacks on the special counsel, Robert S. Mueller III. Mr. Trump broke over the weekend from the longstanding advice of some of his lawyers that he refrain from directly criticizing Mr. Mueller, a sign of his growing unease with the investigation.

“Former U.S. attorney for the District of Columbia Joe DiGenova will be joining our legal team later this week,” said Jay Sekulow, one of the president’s personal lawyers. “I have worked with Joe for many years and have full confidence that he will be a great asset in our representation of the President.”

The President’s plans to hire diGenova come two months after diGenova appeared on Fox News to allege that FBI and Justice Department officials carried out “a brazen plot to illegally exonerate Hillary Clinton and, if she didn’t win the election, to then frame Donald Trump with a falsely created crime.”

“Everything we have seen from these texts, and from all the facts developing, shows that the FBI and senior DOJ officials conspired to violate the law, and deny Donald Trump his civil rights,” diGenova said at the time, pointing to controversial text messages between two FBI officials that came to light.

…have shown conclusively that there was no Collusion with Russia..just excuse for losing. The only Collusion was that done by the DNC, the Democrats and Crooked Hillary. The writer of the story, Maggie Haberman, a Hillary flunky, knows nothing about me and is not given access.