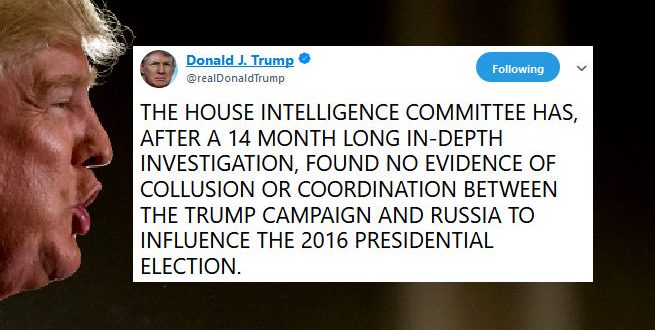 President Trump on Monday touted the Republican-majority House Intelligence Committee’s conclusions on its probe into Russian election meddling after the panel said it found no evidence of collusion with the Trump campaign. Rep. Mike Conaway (R-Texas), who is overseeing the Moscow hacking probe, announced on Monday the committee would stop interviewing witnesses and was in the process of readying its final report.

The committee’s top Democrat, Rep. Adam Schiff (Calif.), ripped the decision to end the investigation. “While the Majority members of our committee have indicated for some time that they have been under great pressure to end the investigation, it is nonetheless another tragic milestone for this Congress, and represents yet another capitulation to the executive branch,” Schiff said in a statement.

“We’ve gone completely off the rails, and now we’re just basically a political forum for people to leak information to drive the day’s news. … We’ve lost all credibility” – Rep. Tom Rooney on the Republican decision to end the House Russia investigation https://t.co/6G7SgZbcoT pic.twitter.com/WXWt0Iaquv

Says there’s no doubt that the Russians meddled in the election to help Donald Trump.

Previous Pentecostal Pastor Busted For Meth Begs Congregation For Forgiveness: My Life Has Been A “Pressure Cooker”
Next CHATTER AWAY: Overnight Open Thread